Whew!  Got another update in before the end of the year.  Tried to work on getting through some of the books on my list & swapped out some of the original ones since I kept reading books that weren't on my list.  I also have my list on Facebook now since DocStoc was being stupid and kept taking it down...that's a rant that I won't go into again. 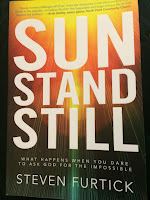 Yeah so this is why I should blog more frequently or at least type up a quick synopsis after I finish reading a book- otherwise I kind of forget what I read 4 months ago.  : )  But basically he talks about believing God for the impossible and living out audacious faith.


"With God's help, I intend to incite a riot in your mind.  Trip your breakers and turn out the lights in your favorite hiding places of insecurity and fear.  Then flip the switch back on so that God's truth can illuminate the divine destiny that may have been lying dormant inside you for years.  In short, I'm out to activate your audacious faith.  To inspire you to ask God for the impossible.  And in the process, to reconnect you with your God-sized purpose and potential...if you're not daring to believe God for the impossible, you're sleeping through some of the best parts of your Christian life...if the size of your vision for your life isn't intimidating to you, there's a good chance it's insulting to God." 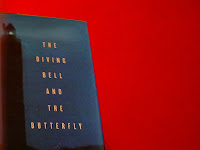 Such an interesting book that my friend Kim let me borrow.  Bauby was the editor of the French Elle when he suffered a massive stroke and was in a coma for almost 3 weeks.  He then suffered from locked-in syndrome, where he could only communicate by slightly moving his head and eyes.  His memoir was written by him blinking his left eye to select letters one by one as they were read off to him. 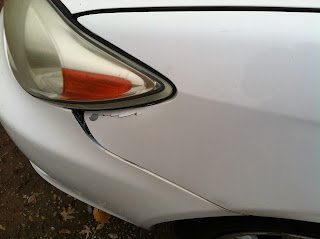 Not nearly as exciting as if I had gotten a picture of the deer that I smashed into on the way to Michigan.  But I was going 60, it was dark, and despite the fact that I caught it solidly on the back hip, it may have actually hobbled away without dying.  I was really lucky that the grand total of repairs was only $25- big shout-out to my favorite mechanics at Eskew Automotive!! 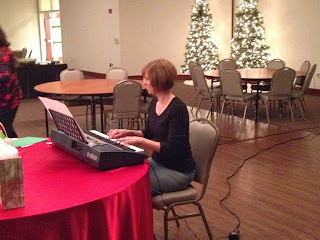 For our county trustee Christmas dinner, I busted out a classical masterpiece for playing the piano in public... The 12 Days of Christmas.  Not my best performance ever, but people couldn't really notice since it was a sing-a-long.  I think I should be good for another several years before I play in front of people again.

#99 read Getting Naked Later: A Guide for the Fully Clothed by Kate Hurley
Apparently there needs to be some clarification with this title- the emphasis is really on later, not naked.  This was a great book where Kate mixes a ton of humor with a lot of honesty as she discusses being single- the joys, the struggles, how the church deals with singles.  She really spoke to a lot of people- those who are struggling with being single, those who are content (but other people aren't for them), and everyone who swings between those two extremes.

This is one of my friend Kristen's favorite books.  Definitely tugs on your heartstrings and I have to say I now know way more about hearts & surgeries than I ever did before.  But that's all I'm saying about the book because I don't want to say anything that will spoil it! 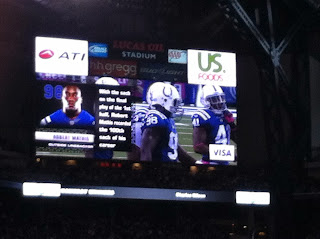 First game of the season that I went to was a huge win against the Seahawks.  You know it's a good one when your voice is practically gone & your hands are sore from clapping so much.  It was also the game where Robert Mathis got the 100th sack of his career.  The man is a beast. 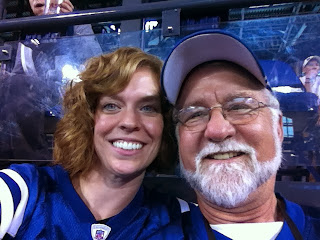 Game #2 was a win against the Titans (yay for dominating the division again like normal).  Love getting to spend time with this guy!! 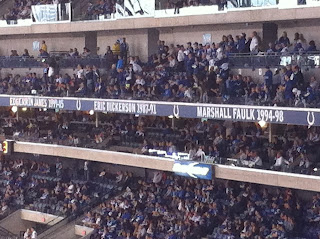 And game #3 was a Christmas present from my fantastic roomie, Sarah.  Aside from seeing my third win of the year in person, they also had a Colts Homecoming week where a bunch of former players were down on the field at halftime.  The best part though was getting to see Eric Dickerson & Marshall Faulk inducted into the Ring of Honor.  This might mean I was kind of a weird little elementary school girl, but Eric (along with Bo Jackson) was my childhood idol, so it was great to see him out there.

Good news...there is hope on the horizon of actually accomplishing some interesting things on my list by the next time I blog...so stay tuned!
Posted by hjwillman at 10:15 PM