The One with the Birthday Extravaganza & a Tribute to Wilbur Willman

Prepare to be wowed by the amount of things I have accomplished since April! For my birthday, my wonderful friends agreed to help me knock out a big chunk of my list. Our goal: cross off 15 items in 24 hours. The reward: I get to cross off any item off this list that I don't want to do. We did it! But I'm holding off on choosing which item to cross off until the list is closer to being finished. Here's the motley crew that took on the challenge: 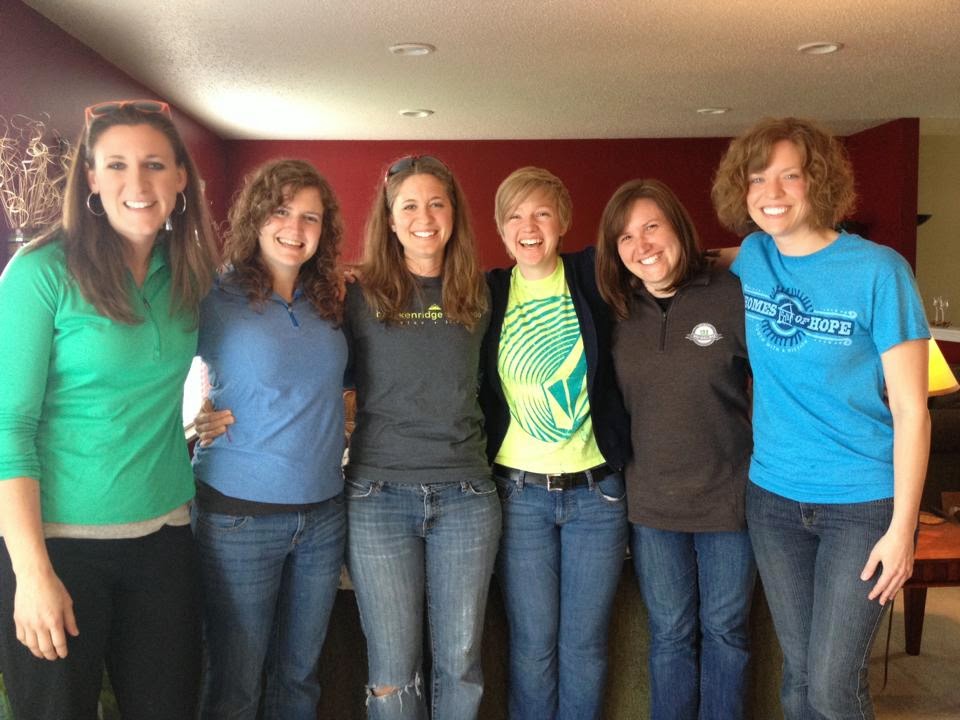 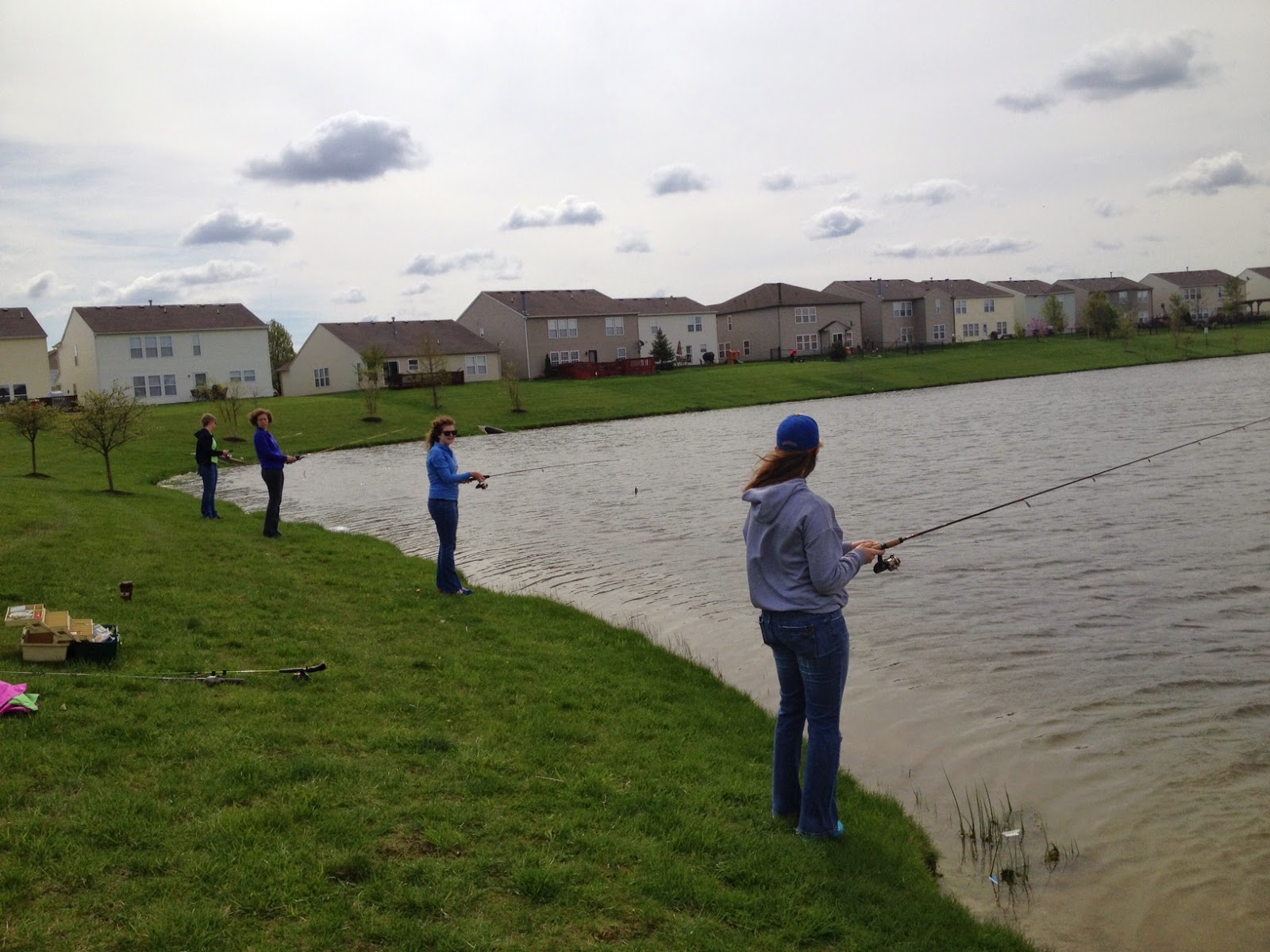 We're not exactly sure if it was actually ok to fish in the neighborhood lake, but that did not stop us. The wind & lack of fish (aside from the gigantic rotting one near the shore) are really what stopped us. 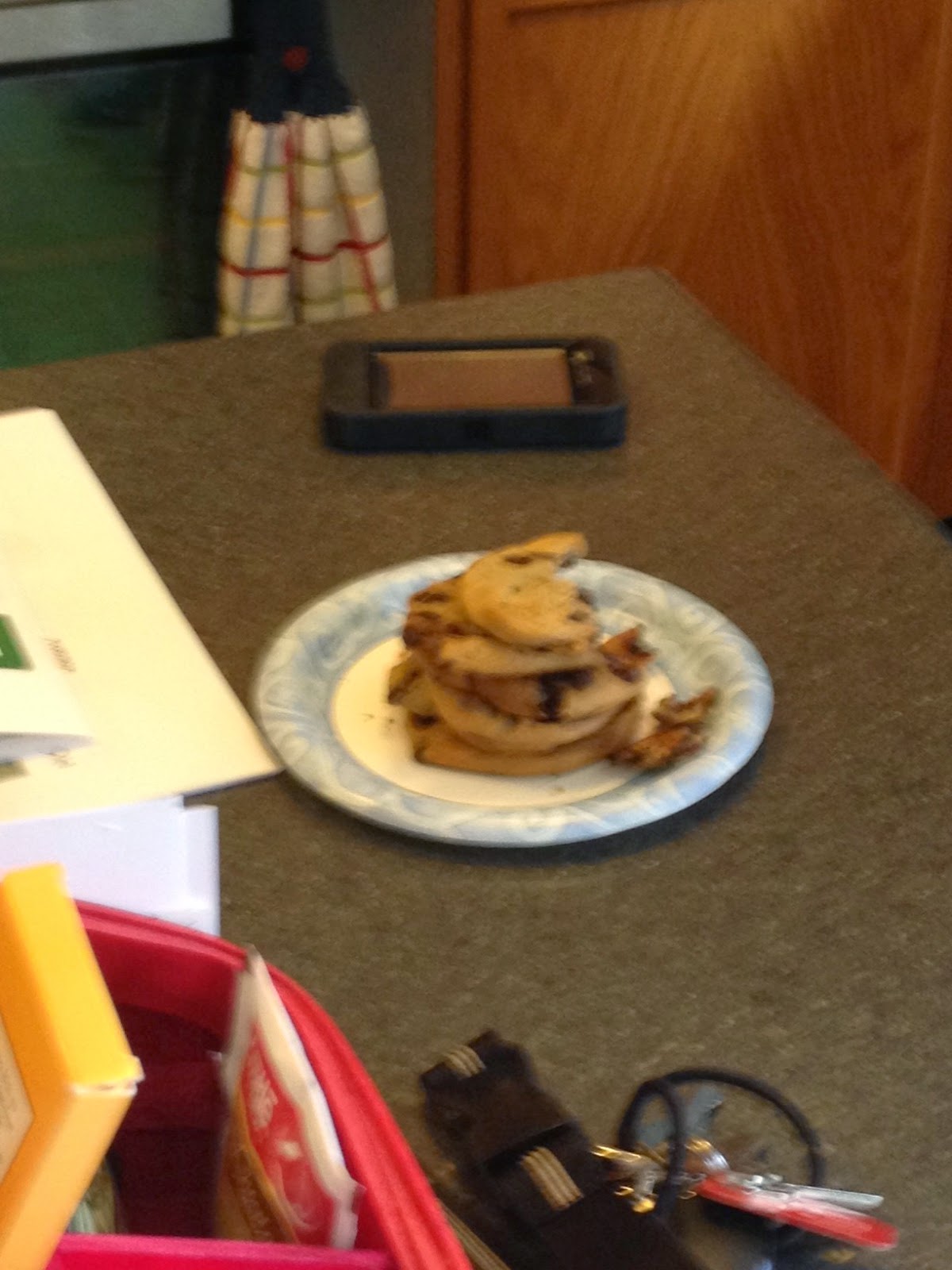 Due to the enormity of the day, I did not give in to peer pressure and make dozens of cookies. 6 made, 6 eaten. Excellent breakfast.

#275 chase a duck
So...this wasn't really very exciting. I felt like I should have planned out something more dramatic, but I ended up just kind of hunching over & running very awkwardly. Here's the video. 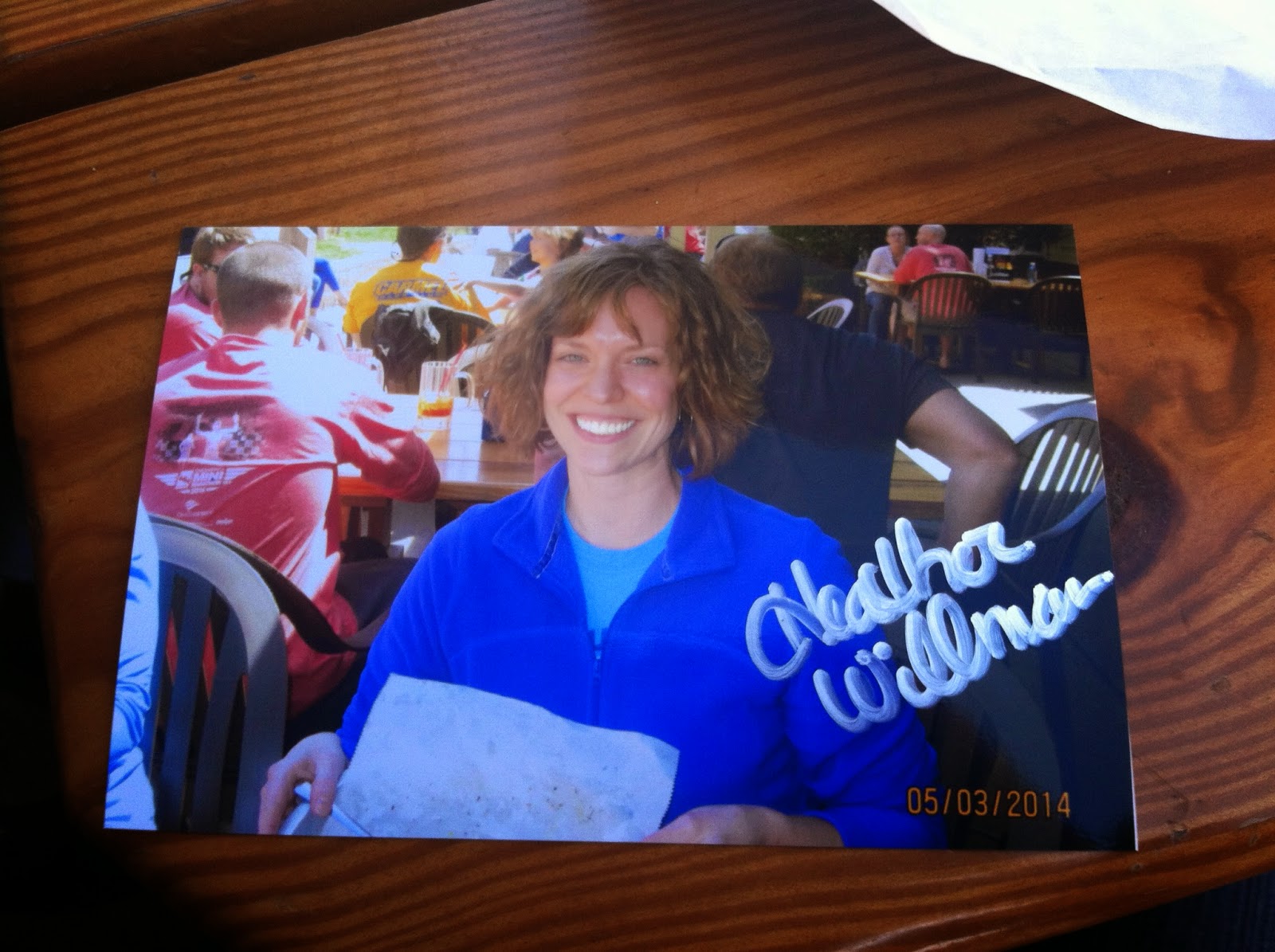 Yeesh definitely one of the harder items on the list. 1 pound of meat after it's cooked. But with incredible support/stories to try and distract me, plus an iron stomach, I powered through. You can watch part of the painful process here. Be sure to look for my picture hanging on the wall at Bub's. : )

#148 climb to the top of the Soldiers & Sailors Monument 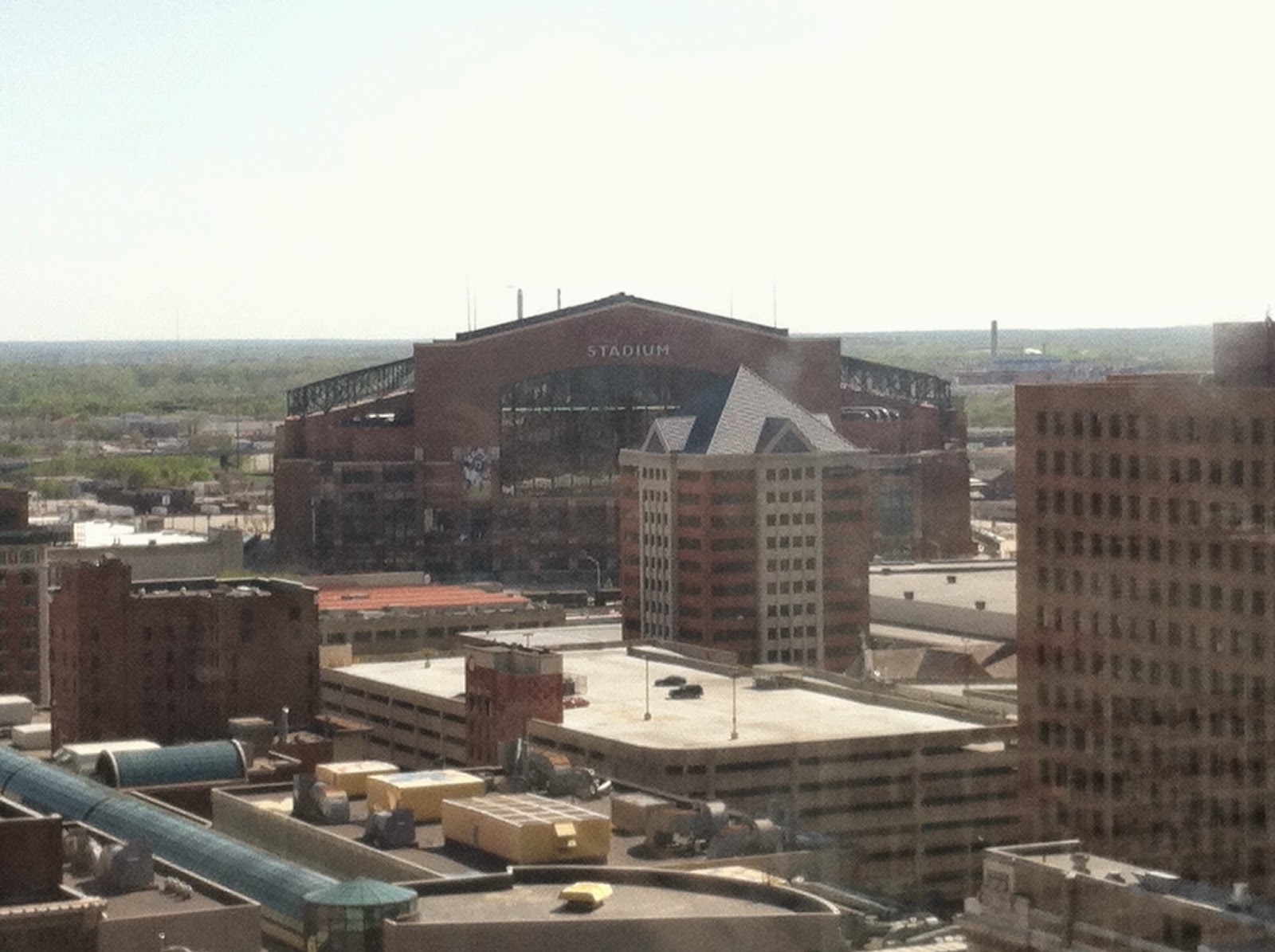 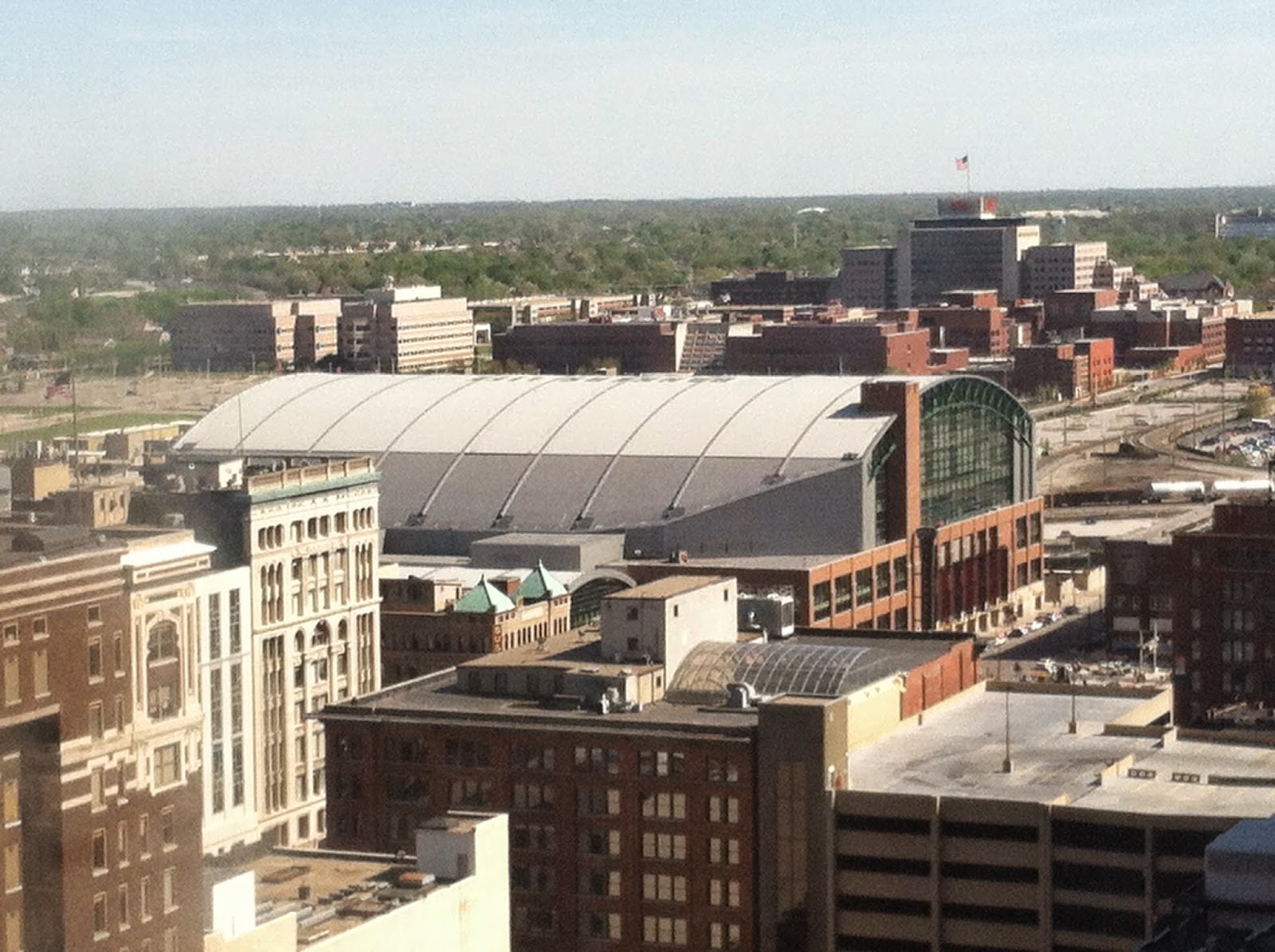 I still haven't decided if this was a great idea to try and walk off some of the meat, or a horribly bad idea. By the time we made it to the top of the monument, my stomach was a bit more like a brick than a stomach. But the view was great and we got to look down on some of my favorite places.

#155 explore Mass Ave.
Our exploring was kind of eh. Some of us don't really like shopping. Or browsing. Or exploring. Or walking really. We were pretty tired at this point, so we left most of Mass Ave. unexplored. And apparently without a picture. : )

#276 polish someone's shoes
To continue in the tradition of not taking pictures...apparently I don't have one of me as I polished Ashleyne's boots. This is what happens when I don't blog until months after the fact. Pretty sure they're the shiniest boots she's ever owned though!

#269 throw a drink in someone's face
This was definitely my favorite item from the day!!! Holly was the one who put it on the list initially, so she knew that she would someday be the victim. She knew it would be coming at some point during the 24-hour extravaganza, but I wanted to do my best to surprise her. I texted Kim while we were all sitting around the living room so that she'd be ready to videotape the instant I got a chance to do it. I only ask that when you watch the video later in the blog that you will cut me some slack. I drank most of the water from my glass first, I asked to see her phone so that there would be no chance it would get wet, and I didn't do it to her while we were out in public. And I promise it only looks so hard because it was from such a short distance & I had to do it fast before I started laughing. Don't worry, the video is farther down in the blog. Kim's laughter is definitely my favorite part.

#186 eat corn on the cob without using my hands
This one comes thanks to one of my high school kids, Maggie Roth. She is one of the people who added several items to the suggestion box for my list (which will remain open for ideas until the list is completed), and this one made the list. Not as hard as I thought it would be, except for having to turn it over to start the next row. And the fact that I didn't want to eat another bite of food for the day. Corn! 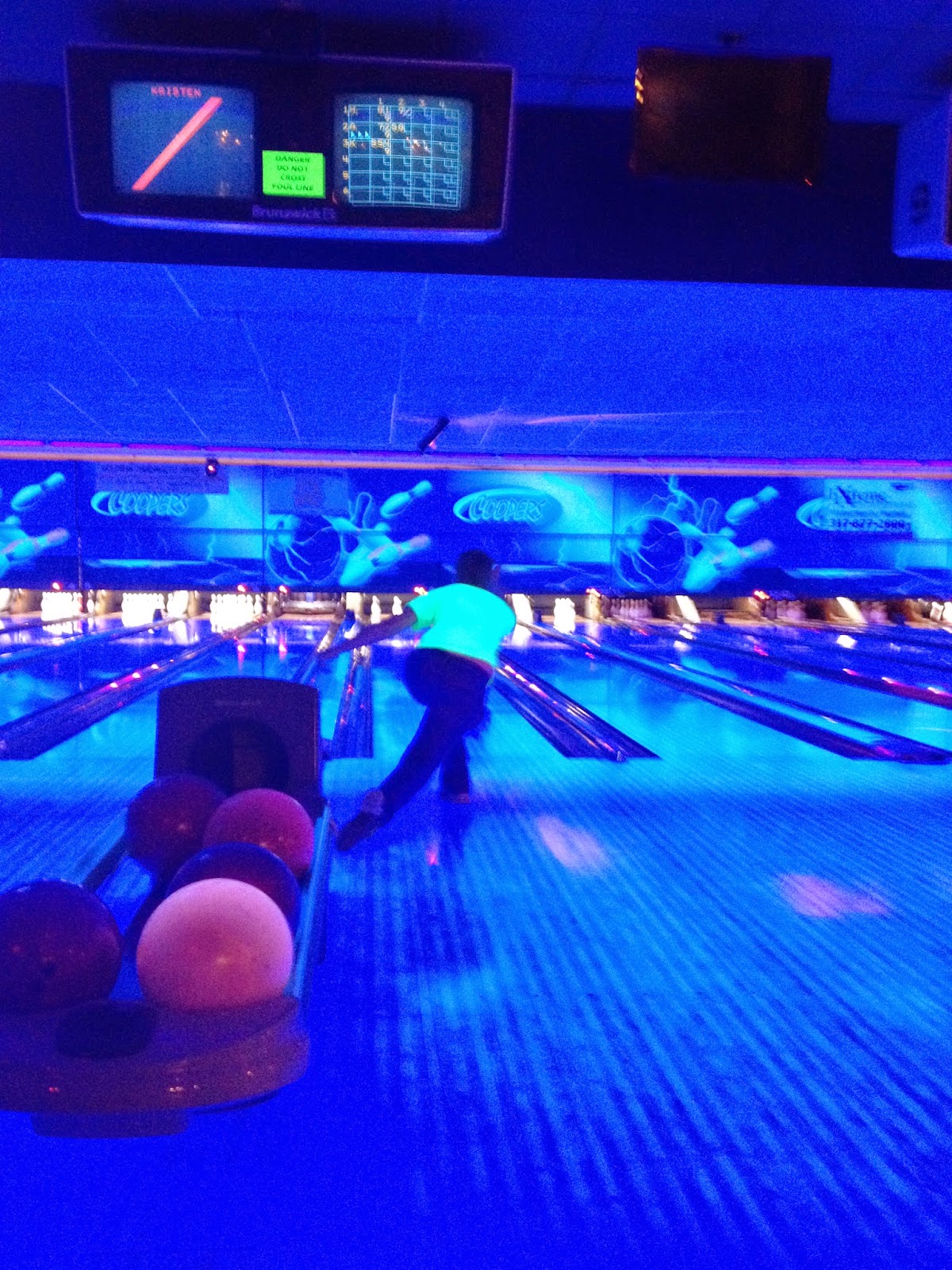 A bowler I am not. Shockingly, cosmic bowling did not add to my skill level. I am usually lousy, slightly better the second game, and then increasingly lousy if I play any additional games. But it was a blast and Ashleyne won the award for most entertaining bowling form with her arms above the head windup. 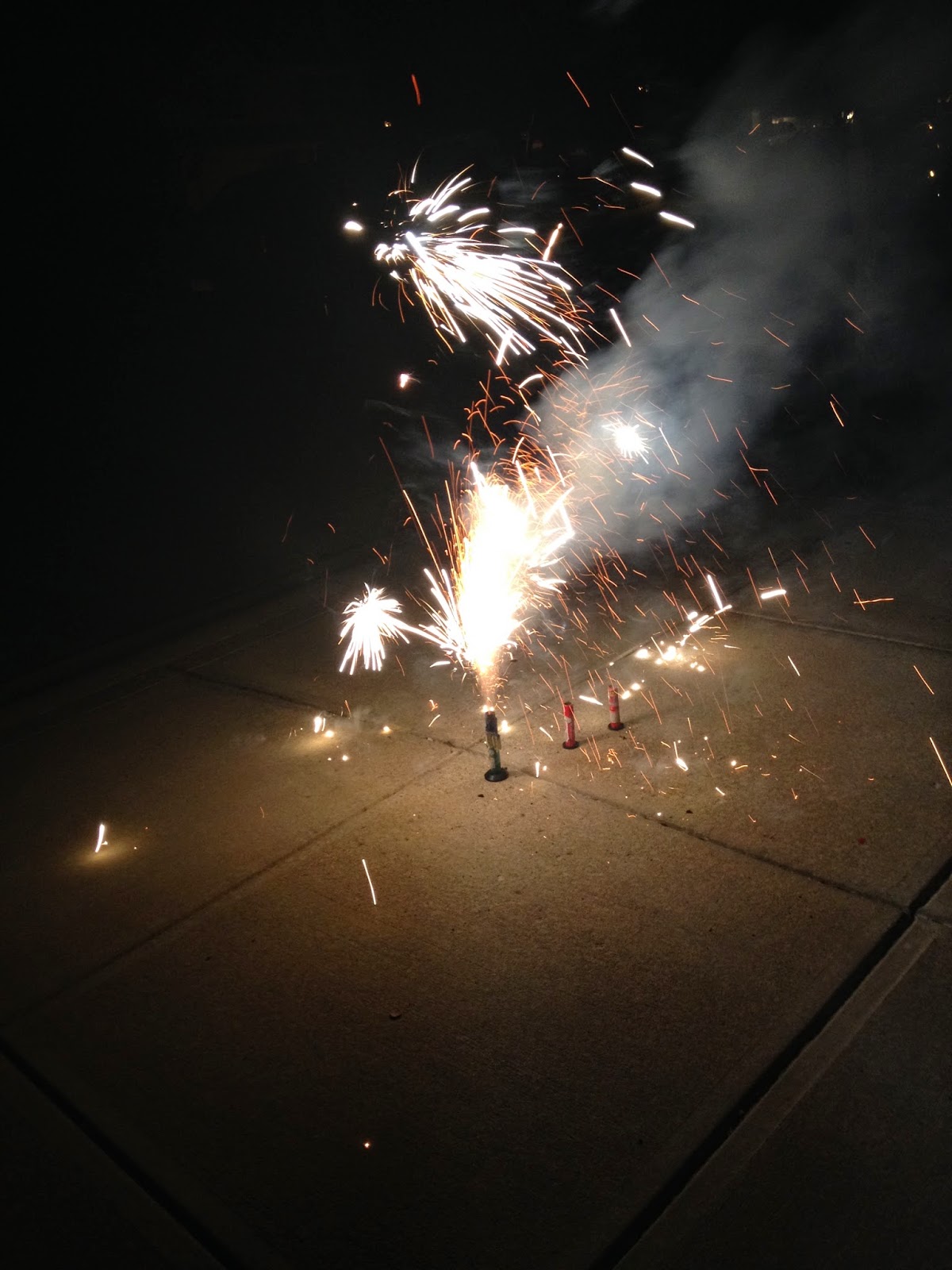 We almost had to break the law to get this one crossed off the list. We barely got them set off by 11pm, but luckily it was unnecessary to be a rule breaker. 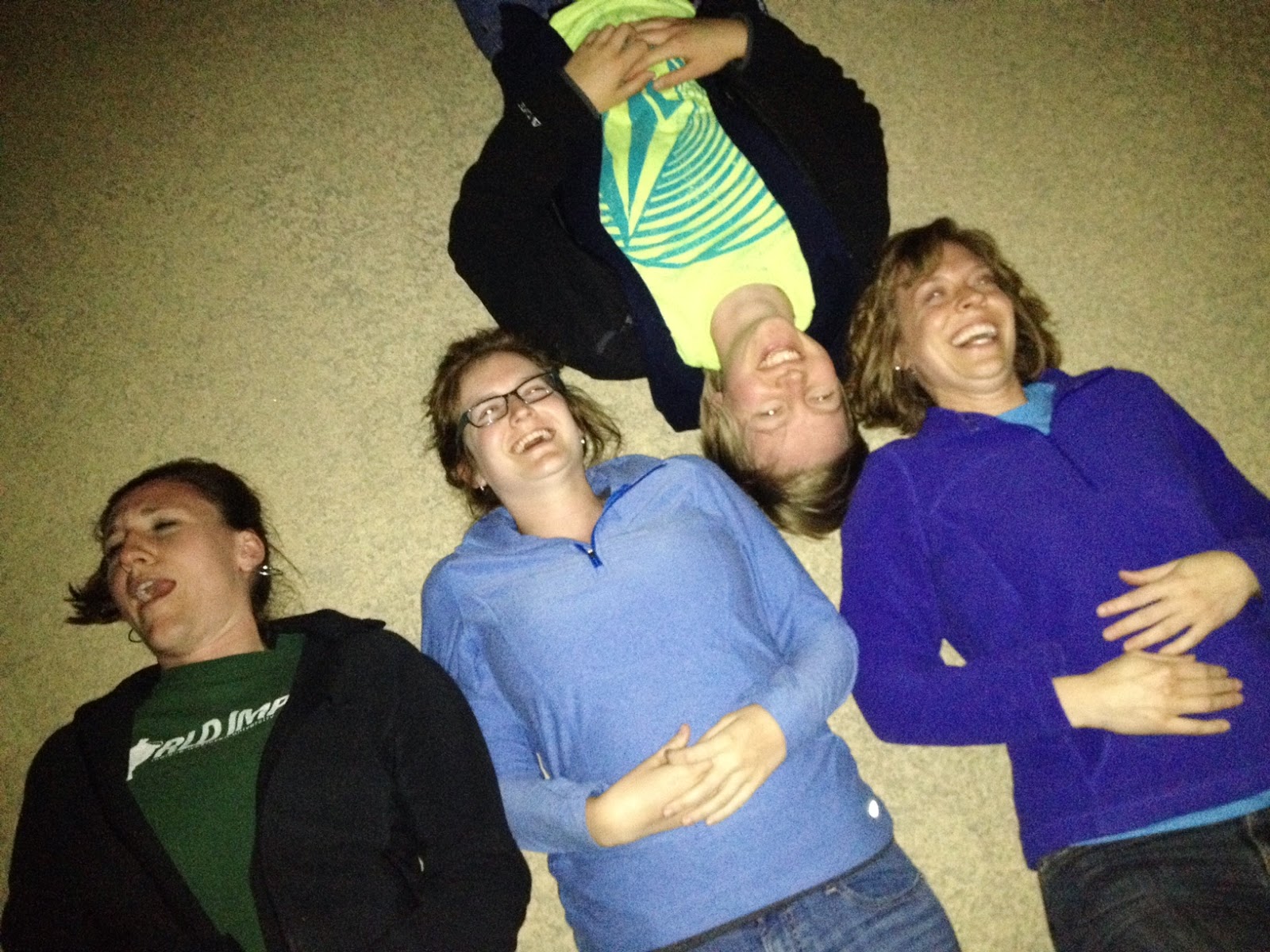 Yep. This is us star gazing. 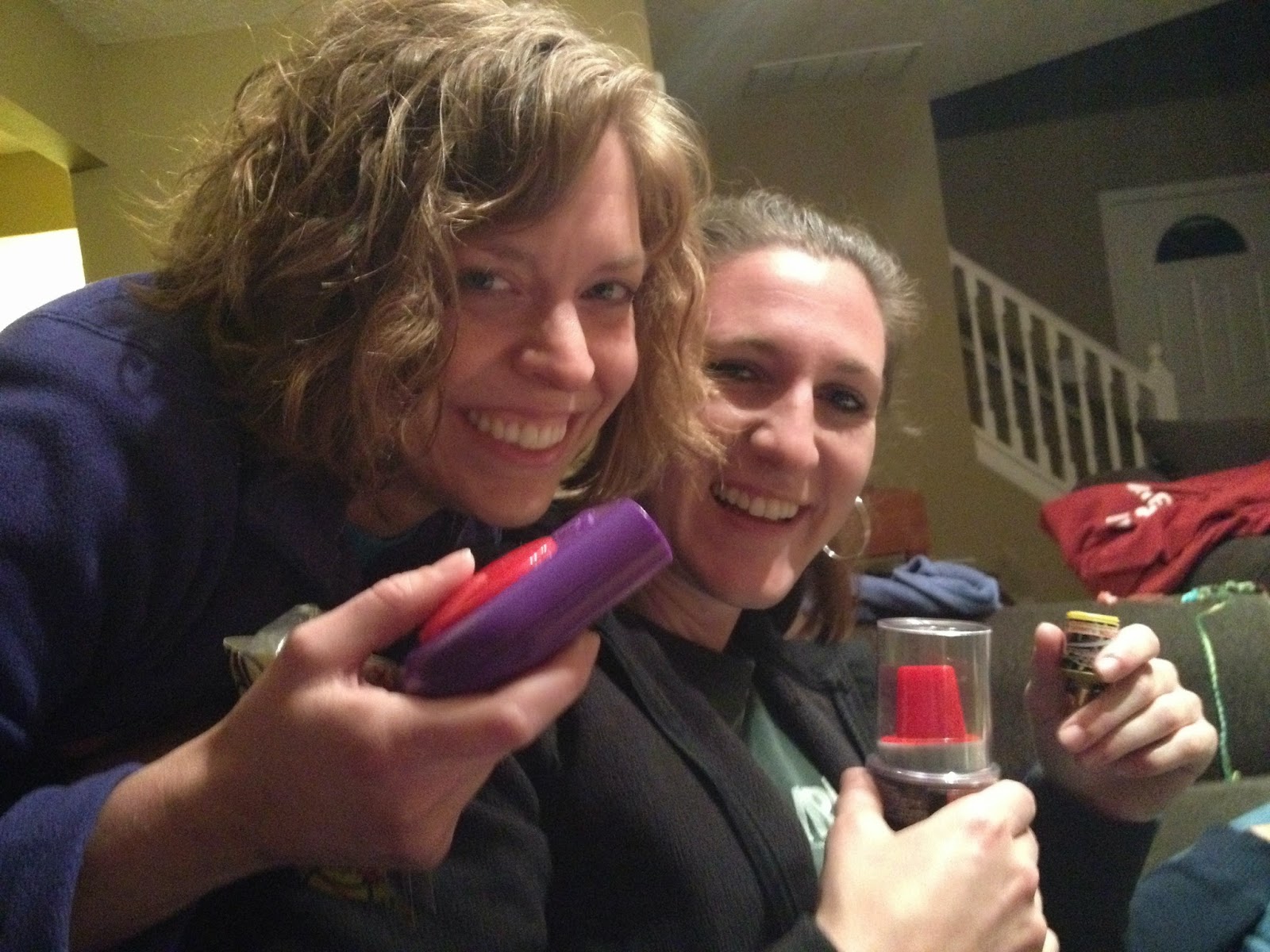 It was a hard-fought battle, filled with extremely difficult words and a lot of buzzing from the Taboo buzzer, but Liz pulled out the victory in the end. Her prize was the rest of the shoe polishing kit! 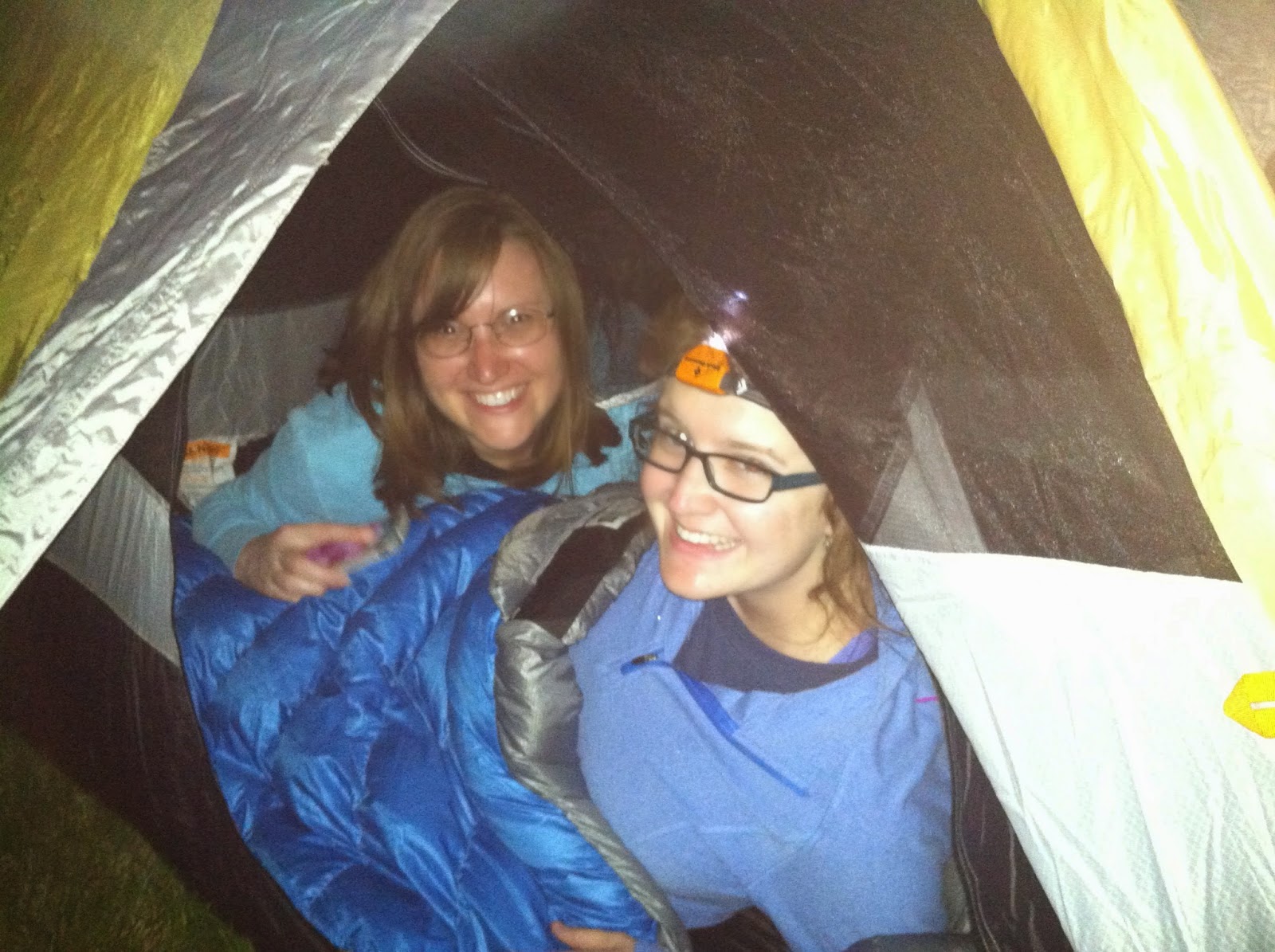 We finished a strong day of frolicking & cavorting with some backyard camping at Kristen & Ashleyne's house. We were utterly exhausted, but triumphant! Now I just have to convince them all to do it again next year!! 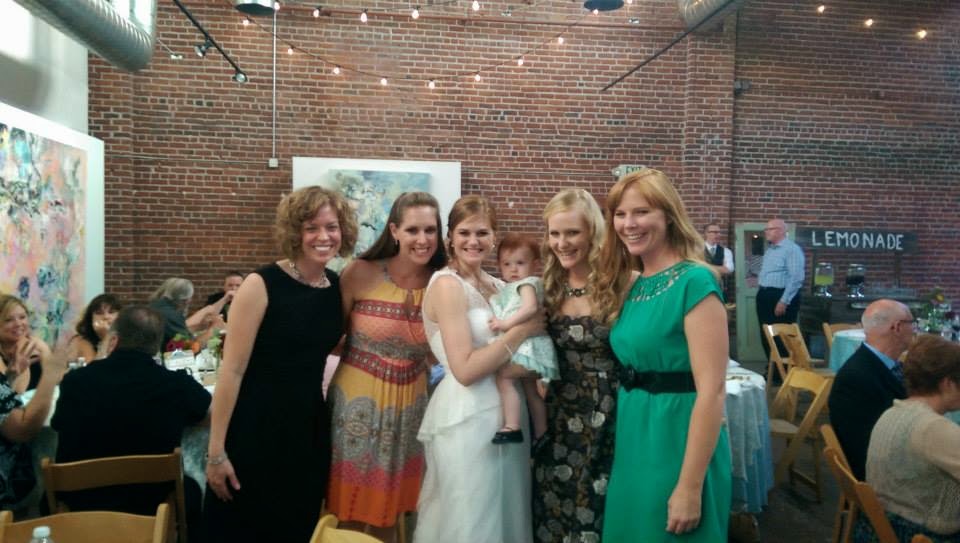 This was such a great trip! I had not seen the majority of my CA relatives (my Grandma Willman's side of the family) since we did a big family reunion out in CO the summer of '96. My parents and I went out to celebrate my 2nd cousin Wendy's wedding. It was so much fun to meet all of her college friends, catch up with all of my cousins, and meet their spouses & kids. In this picture is Jen (my cousin Nick's wife), cousins Wendy, Whitney, & Stephanie, and Wendy's sweet little Olive. 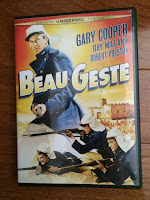 I had seen this movie multiple times, but when Travis says that he really enjoys a book, that's one that must be read. My dad first read this when he was a teenager and always loved it. It's such a great adventure story, and you should definitely read it before you watch the movie because it will keep you on the edge of your seat even more. 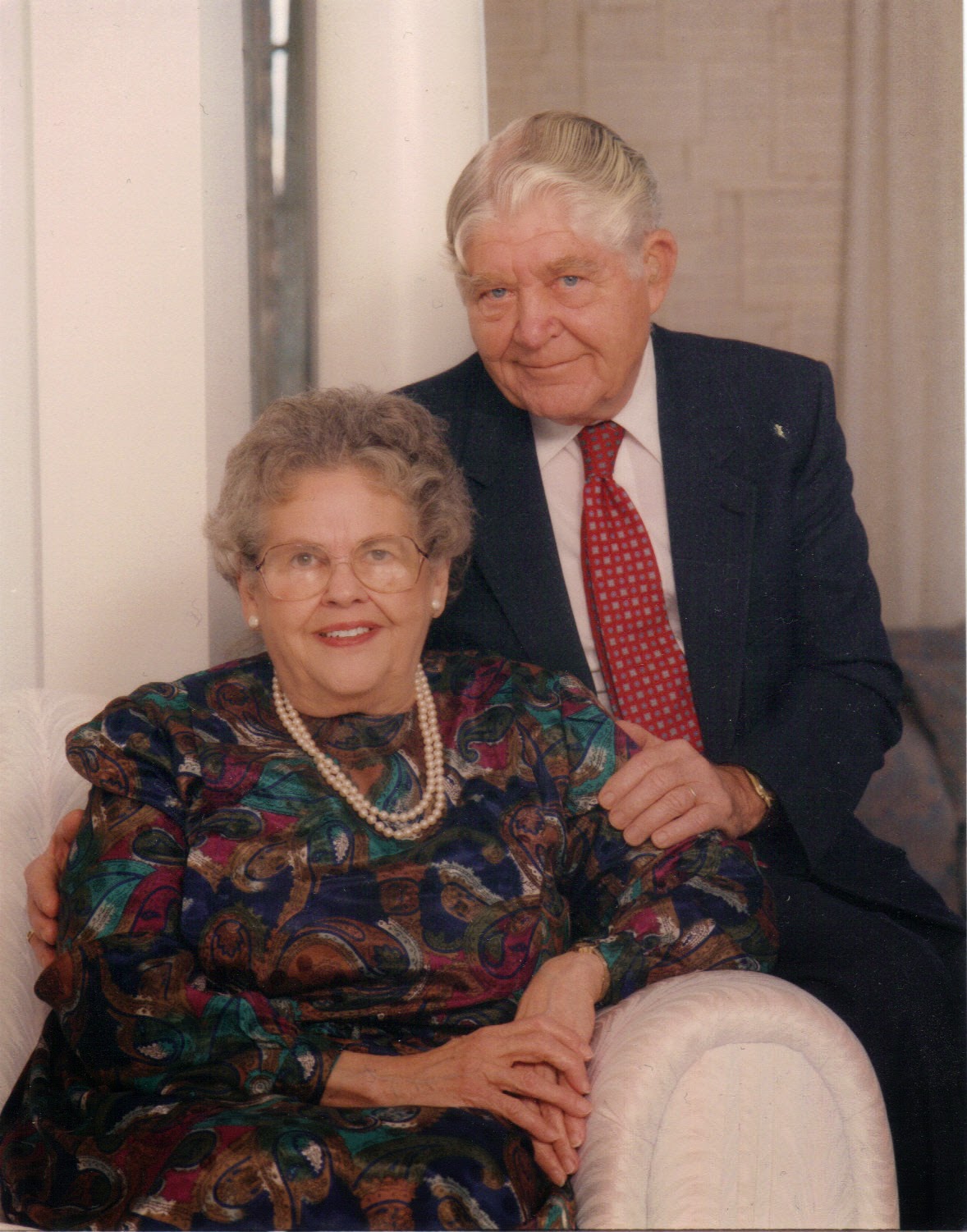 My grandpa wrote his memoirs back in 2010. It contains so many delightful stories of his days growing up on the farm, being in the Air Force, meeting my grandma, raising their four boys, their world travels after he retired, and so many more memories. However, I really want to end this post with a bit of a tribute to the amazing man that we lost at the age of 98 on August 15th.

My grandfather was a hard worker, still gardening outside his assisted living center last summer. He was extremely bright, and continued to keep his mind sharp by doing jigsaw puzzles until the last. He loved his wife, kids, grandkids, and great-grandkids with his whole heart. Nothing was more precious than seeing him coo and chuckle as he held a tiny baby in his arms. He remained physically active as he recovered from hip surgery, beat multiple cancers, and continued to golf well into his 90s. He is the most generous man that I have ever known, and we were blessed to receive money from him every birthday & Christmas that helped to pay for college. Grandpa was a wonderful storyteller, had a home that provided us with so many childhood memories, had his own unique fashion sense with his suspenders & famous mustard yellow socks, gave extremely entertaining speeches to his clan at family holidays, and gave hugs that involved him viciously pounding you on the back.

There is so much more I could say about my grandpa and the impact he had on my life, but I will just finish by saying that the things I am most grateful for are his strong faith and the fact that he is now reunited with my equally wonderful grandma in heaven. Our patriarch will be deeply missed. I love you, Grandpa.
Posted by hjwillman at 11:21 PM No comments: