Ok so the grand total completed out of 300 after 3 years is...87! So I'm only 3 off my pace and some (go to 10 Pacers, Colts, Indians games & a couple of books) are partially completed. I'm feeling good about the next few months too
since Holly is supposed to be helping me complete 31 things before her 32nd birthday in July. Without further ado, here's what the last few months have entailed: 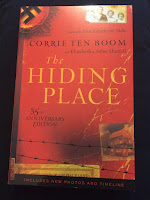 This was such an inspiring book and definitely helps remind me of how blessed I am in my life, as well as how little true adversity I face on a daily basis. Corrie Ten Boom was a Dutch watchmaker who helped Jews escape from the Nazis and was the only one from her family to survive the concentration camps. Hers is a story of learning the inner strength she was given by God, trusting that He is still sovereign in the midst of great evil, and realizing what it truly means to love and forgive your enemies.

"Perhaps only when human effort had done its best and failed, would God's power alone be free to work."
"And I would know again that in darkness God's truth shines most clear."
"...when we're feeling poorest--when we've lost a friend, when a dream has failed, when we seem to have nothing left in the world to make life beautiful--that's when God says, You're richer than you think." 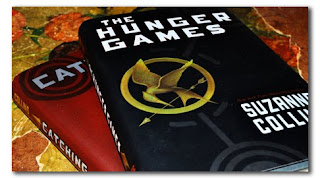 I decided to go spend a nice Saturday lunch eating popcorn and watching the second of The Hunger Games movies. I have to say that even though he's not necessarily one of the main characters, Stanley Tucci cracks me up in his role. The movie was quickly forgotten though since I had 3 missed calls & a bunch of text messages saying... 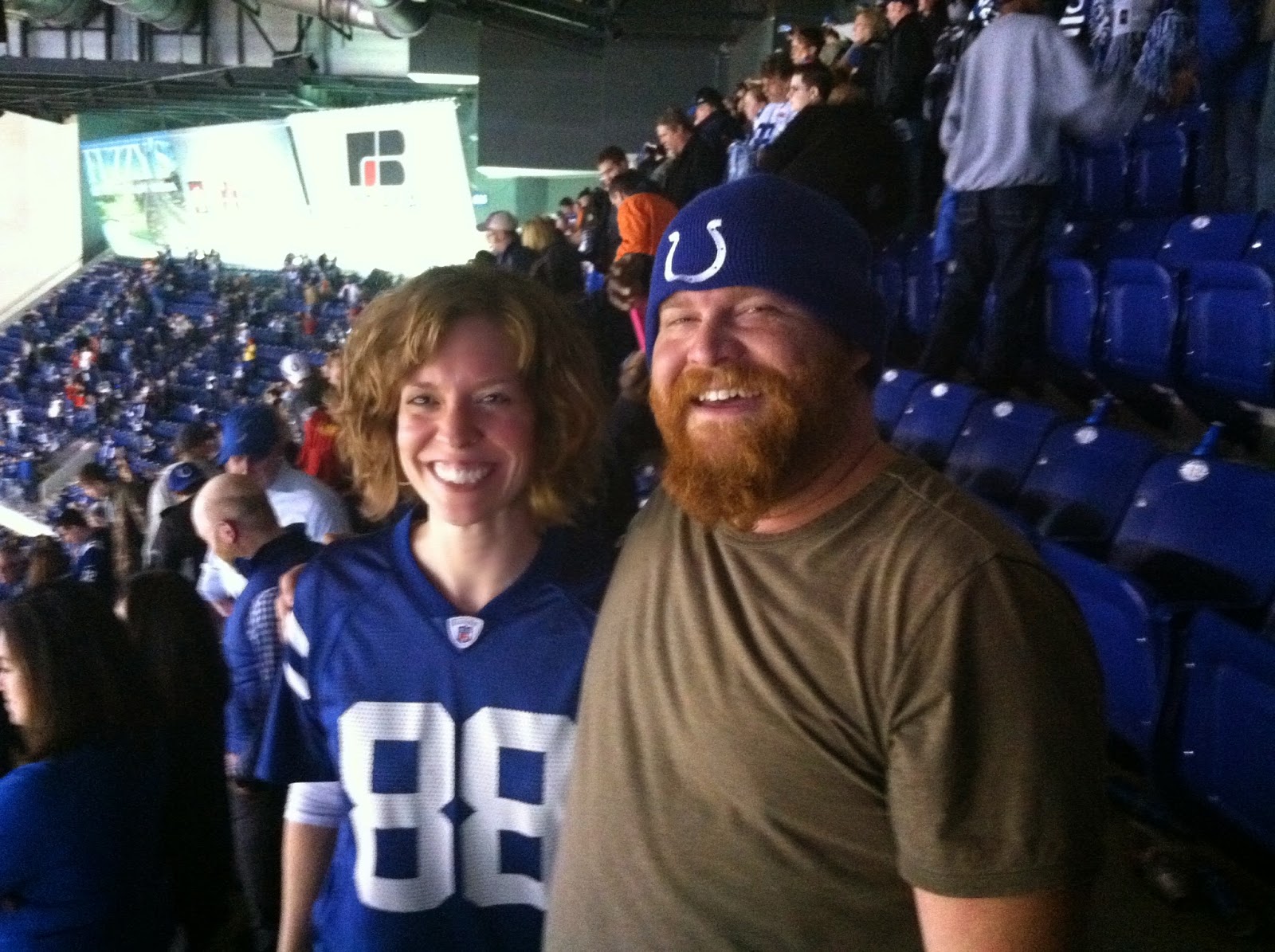 Kyle had scored free tickets to the playoff game against the Chiefs & was seeing if I wanted to go with him. Um...yes! This may have been the biggest swing of emotion I've ever experienced at a game I've been to. The first half was absolutely miserable watching them (which of course I've experienced before as a life-long Colts fan), but the comeback win produced perhaps the loudest and most electric atmosphere I've been in there. Gotta say that Luck kid's not too shabby. 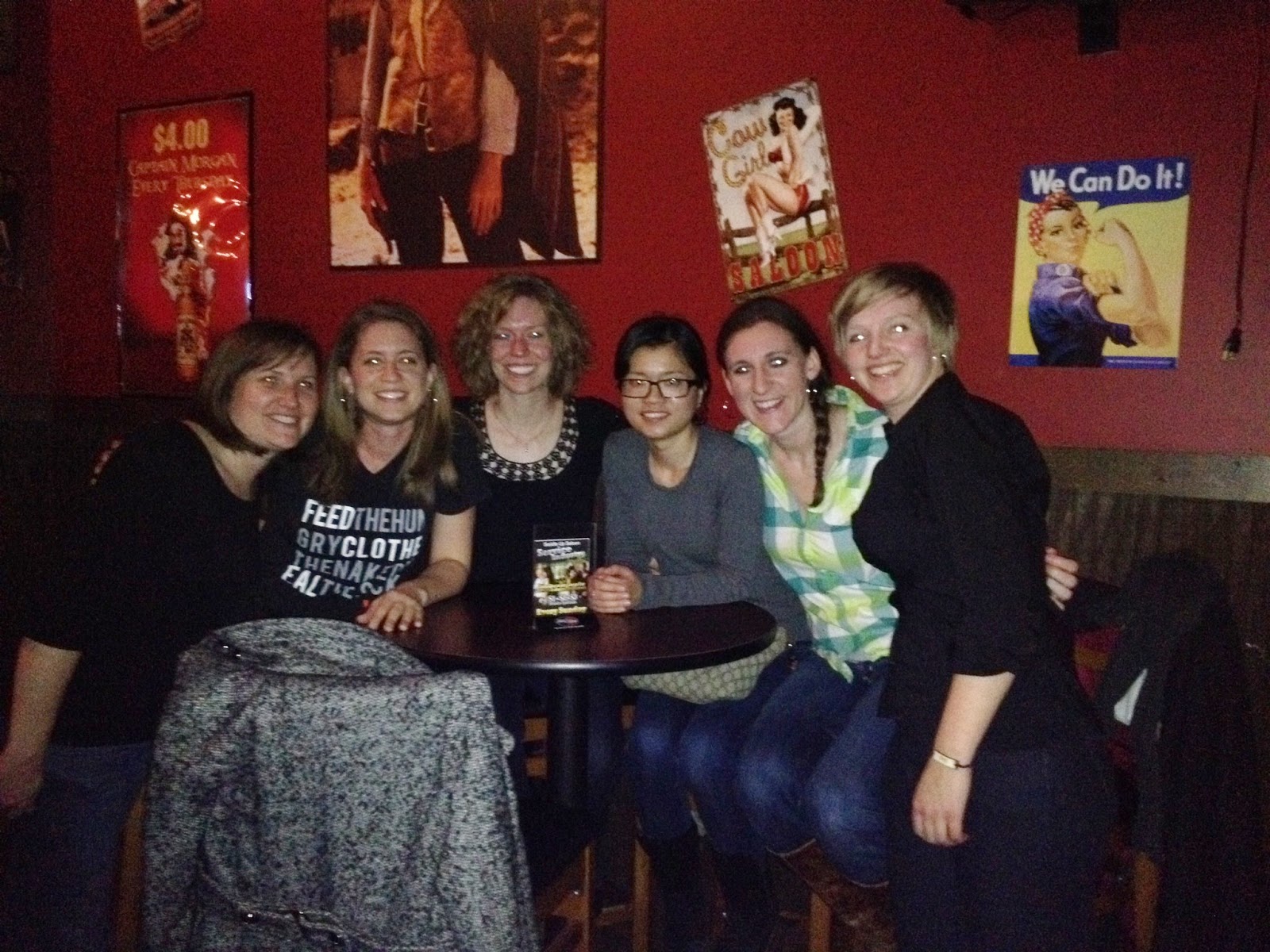 Yes, line dancing. We all know my great love of dancing, but I will willingly oblige my friends when they are deciding what they want to do for their birthday celebrations (as you'll see again below). Celebrating the lovely KB's birthday involved eating at an Ethiopian restaurant on the west side and then heading to Saddle Up in Castleton. Sadly, my bum knee will probably prevent me from pursuing my line dancing career, but I think there's hope for Ashleyne...she has a surprising knack at quickly picking up steps just from standing and watching people for a couple of minutes. And yes, that's what our eyes actually look like when we go out for a night on the town. : )

Emma is probably one of my favorite Jane Austen books...although if you want to be creeped out, go search for pictures of the book cover and you will realize this is the only one where she doesn't look really scary. She may not be my favorite female lead, but some of the supporting characters are really entertaining and add a lot of humor to the story. I also would recommend watching the Gwyneth Paltrow movie, as well as the BBC version with Romola Garai. 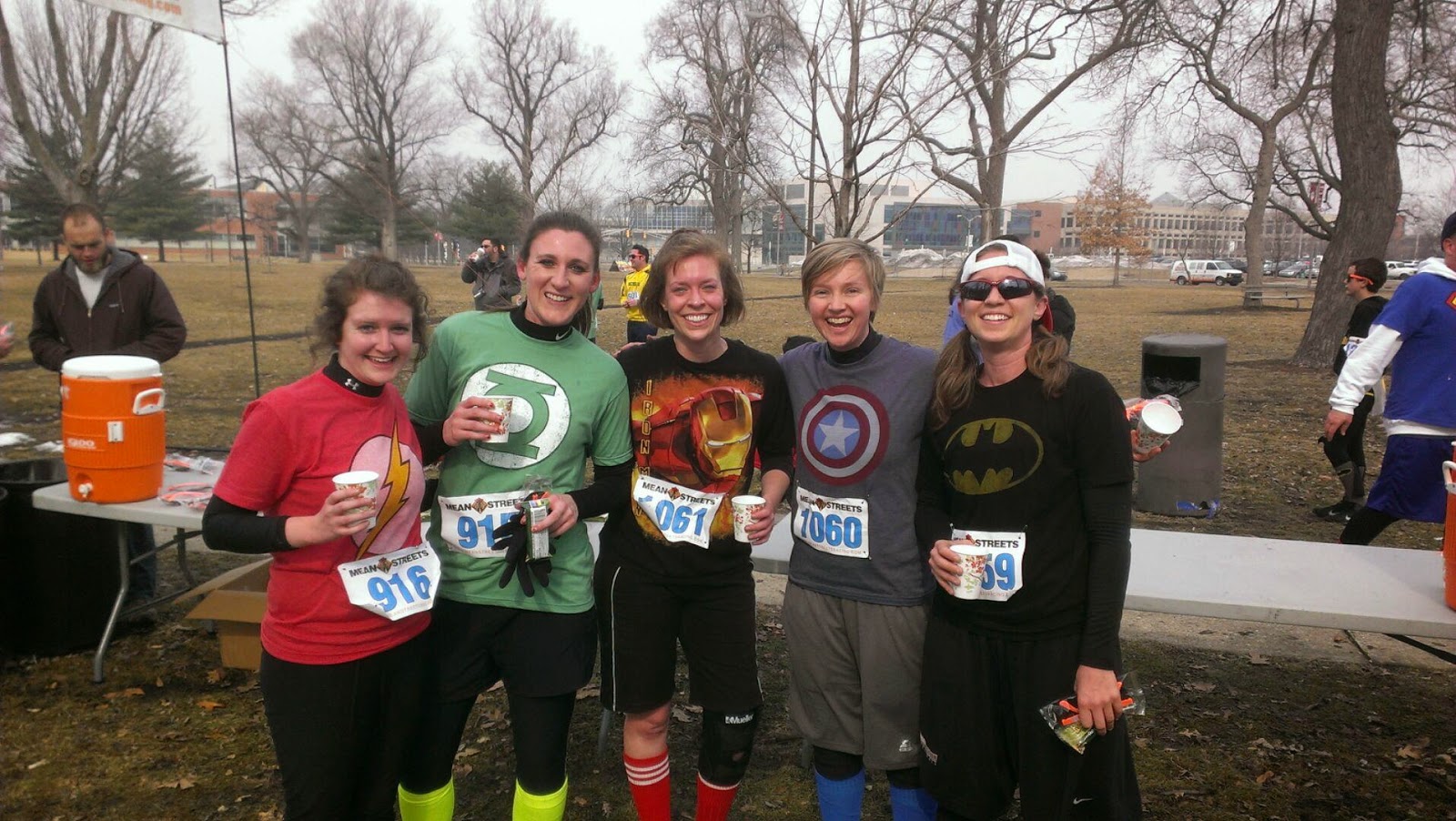 We now enter birthday celebration #2. As someone who rarely runs, has only exercised a handful of times since my Curves closed down a year and a half ago, and has a bad knee, what better way to spend an early, chilly Saturday morning than to run an urban obstacle 5K? But after surviving it (with burning lungs, a minimal amount of blood, and massive amounts of bruises), it was necessary to make it count for something on my list. So obviously it falls under being adventurous since you participate as superheroes. : ) Check out their website if you want to see more about it. My small group is pretty awesome to do so many crazy things together. And Kyle happened to be working downtown so he came and met up with us near the end of the course to cheer us on and run along. Yay for brothers! 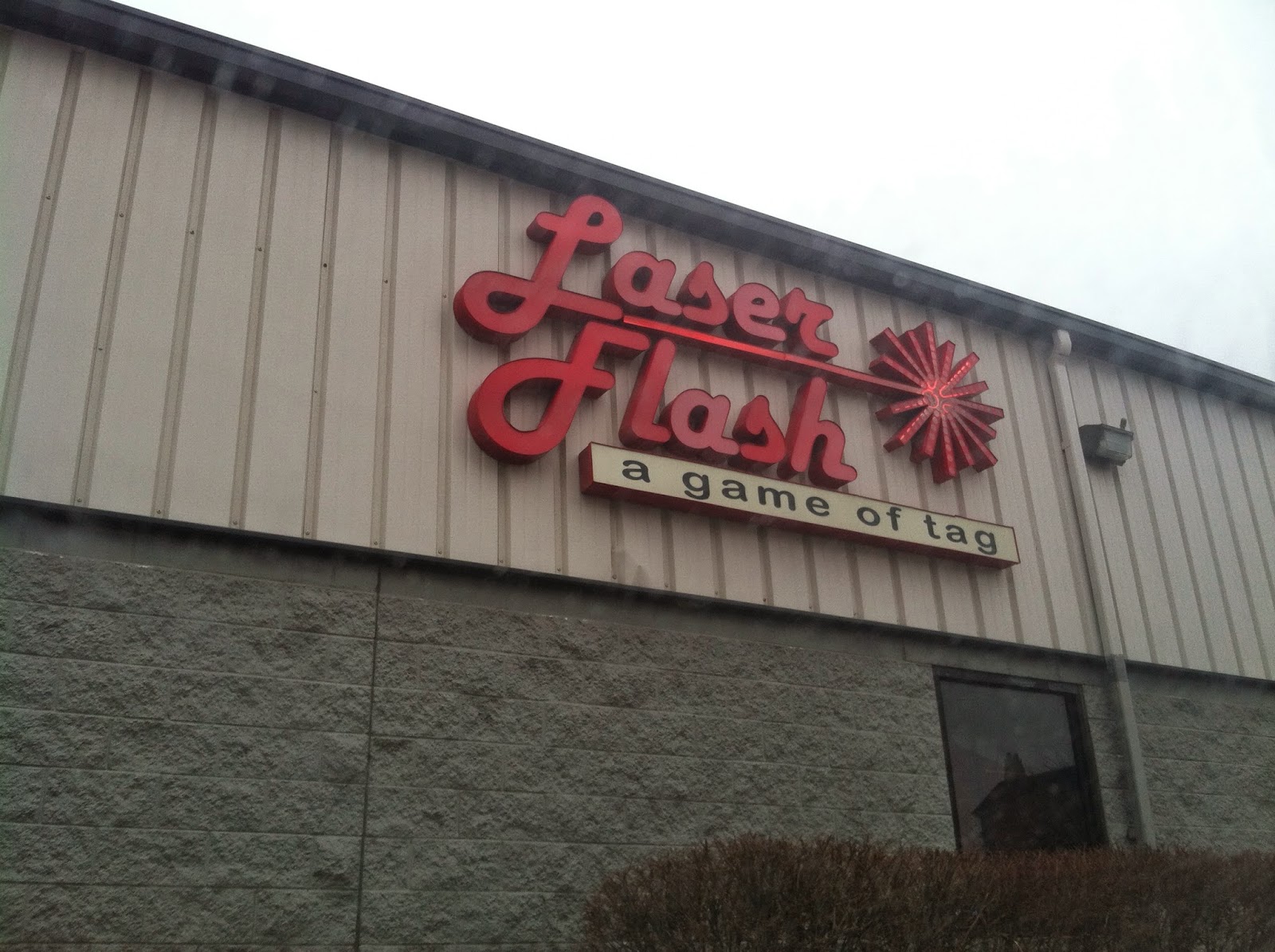 After getting showered and eating some lunch, the next phase of Ashleyne's birthday celebration involved a few intense rounds of laser tag at Laser Flash in Carmel. We even got to play with just our 7 friends so that we didn't feel bad getting destroyed by a bunch of 10 year olds. I don't know how I've gone my whole life with never having played before because it was a lot of fun!

#67 read Love Does by Bob Goff 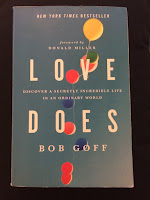 Oh, Bob Goff. I have to say that Bob and I are very different people. He has done some pretty crazy things in his life and uses words like "risk, adventure, and spontaneity" in his everyday vocabulary. Every chapter has another ridiculous thing happening- sneaking into the set of a movie, basically forcing his way into law school, becoming a consul for Uganda, having his kids writing to all of the world leaders & then flying them around the world to meet any of them that responded...you know, normal everyday stuff. But he is a gifted storyteller and I really did enjoy reading this book with my senior girls' group because it's one of those books that really challenges me to step out of my comfort zone to try and live out love in my actions and in all that I do. Some of his many great tidbits:

"...the brand of love Jesus offers is that it's more about presence than undertaking a project. It's a brand of love that doesn't just think about good things, or agree with them, or talk about them...Love does."
"I used to be afraid of failing at something that really mattered to me, but now I'm more afraid of succeeding at things that don't matter."
"Every day God invites us on the same kind of adventure. It's not a trip where He sends us a rigid itinerary, He simply invites us. God asks what it is He's made us to love, what it is that captures our attention, what feeds that deep indescribable need of our souls to experience the richness of the world He made. And then, leaning over us, He whispers, 'Let's go do that together.'"

#235 buy flowers for myself 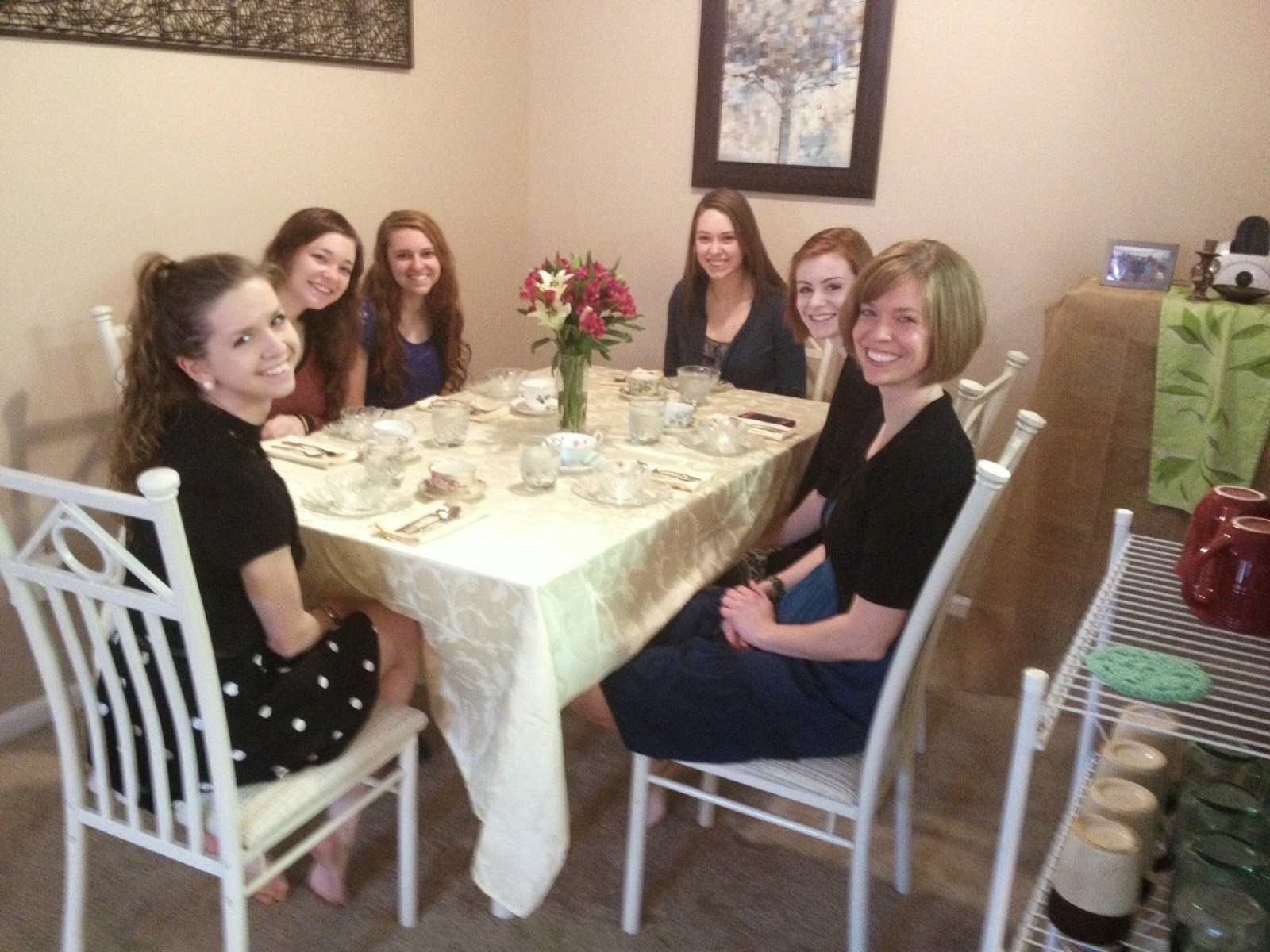 Bought some lovely flowers to use as a centerpiece for the tea party that Holly and I hosted for some of my senior girls. We made way too much food, but I have to say we did a pretty decent job for our first time attempting some of the food we made. Check out her blog here (which you should really be following already anyway) for all of the details about our delicious menu. 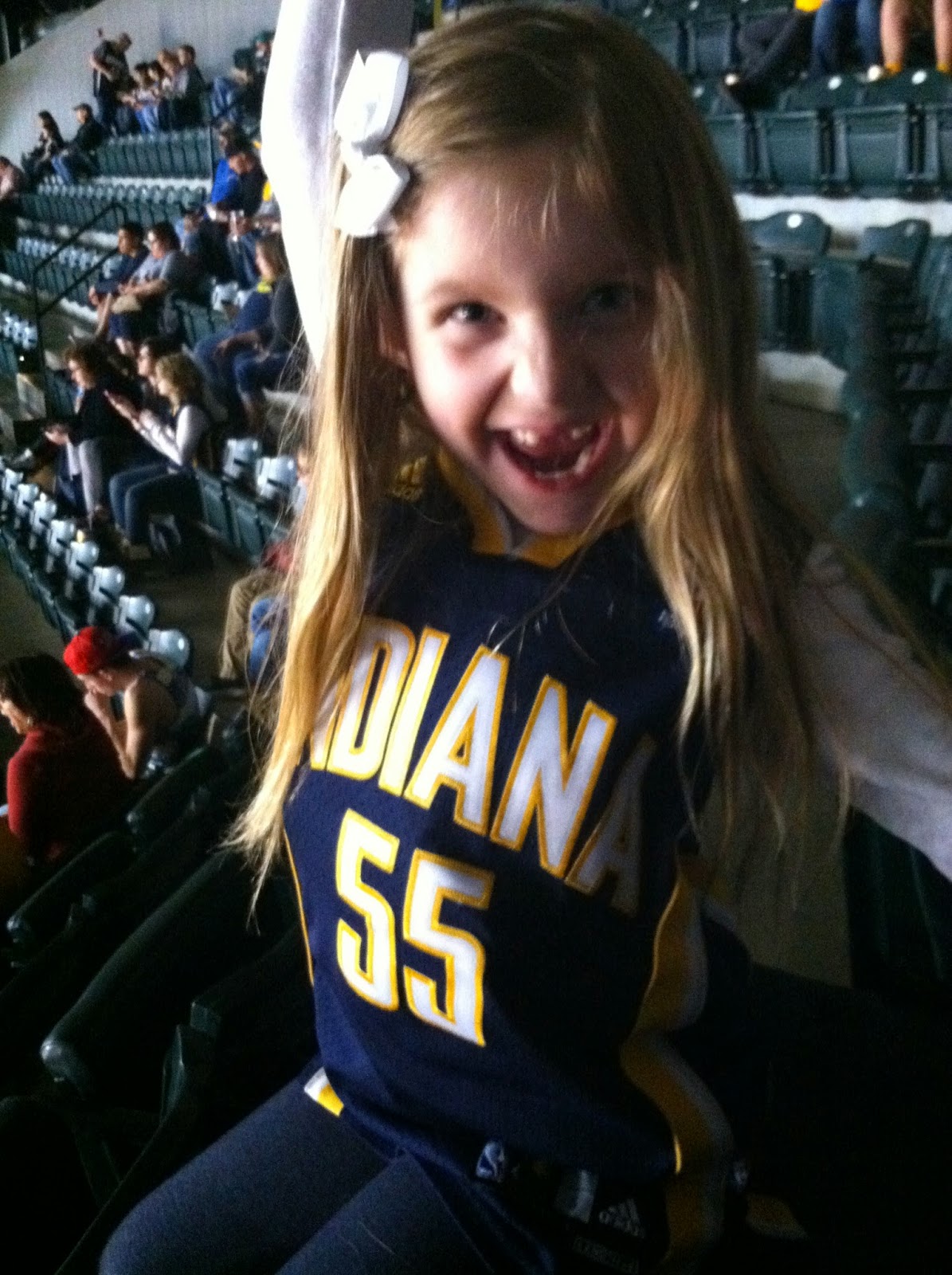 This kid makes my heart so happy. How many 6 year old girls do you know who gladly give up getting toys for Christmas in order to go to a Pacers game instead? Best. Niece. Ever. While it was impossible to live up to the hype of last year's game (her first Pacers game, sat next to a lady also wearing a Big Roy jersey, got a pink balloon flower, was on the big screen for about 30 seconds, won a gift card for being the loudest section, and they played much better), we still had a blast! Lily is one awesome kid!!

As a little teaser for my next update...for my birthday extravaganza, my small group & I are attempting to knock out 15 things in a 24-hour period. Because if I do 15 in one day, I can choose one item off my list to cross off that I can't/don't want to do. And the List Master (Holly) has said that if we can do 30 things, I can cross off 5. That's probably impossible, but stay tuned to see how it goes!
Posted by hjwillman at 3:31 PM