Sorry this is such a long overdue post (I'm sure you've been on pins and needles waiting for it), but I started it a few weeks ago and never got back to it. Due to the fact that I am now using my Holly Binder (see the last post if you need an explanation on what that entails), I am reading two books a month so I am giving you one picture of the stack I read, as well as virtually zero summary. 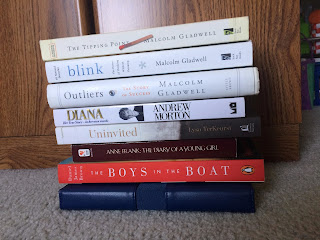 These were all really good books, but I especially liked The Boys in the Boat. It was the first recommendation in the Andrew Luck Book Club and it was really fascinating. It tells about the Washington University rowing team that competed in the Berlin Olympics. There are so many interesting aspects of the book: the background of some of these students as they lived through the Great Depression and Dust Bowl, the technical aspects of rowing and boat building, and all of the social impacts that came with that Olympics. 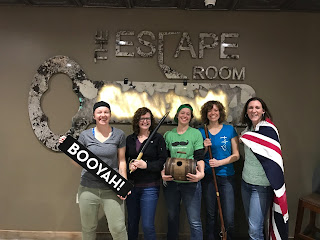 This was so much fun!! We did the 1776 room in Fishers and completely crushed it. I think we had something like 15 minutes left when we finished it. We were pretty well-balanced when it came to searching for clues and solving puzzles. Next time we need more of a challenge! 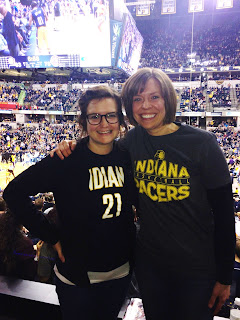 A big thanks to First Financial Bank again!! I could definitely get used to watching Pacers games with food and a comfy seat in a suite. Having Kimbo's company isn't too bad either. : )

#228 volunteer at a soup kitchen
Sorry, didn't get a picture of this one. Not technically a soup kitchen, but I have been super privileged to get to serve with the HS youth group at Soul Food a couple of times. It's a great ministry that takes place down at IUPUI's campus where we get a chance to help serve a meal to some of the homeless in dowtown Indianapolis. This last time the kids also packed lunches to hand out to them. I'm really looking forward to us doing this on a regular basis so that we can continue to serve together and get to know some of these men and women. 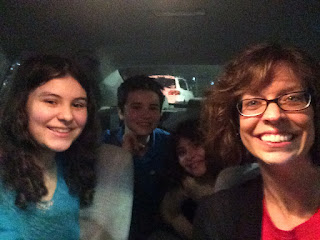 These kids. I no longer babysit them since Allysa is in HS now (sad to see that end after 9 years!), but I at least still get to see them since I tutor Savannah in reading. We went to see Beauty and the Beast together and it was an absolute downpour when we were leaving. Patrick was the one to suggest that I needed to cross dance in the rain off my list still, so we sprinted/danced to the car. Sorry no video, but at least you can see our wet little faces after the fact. 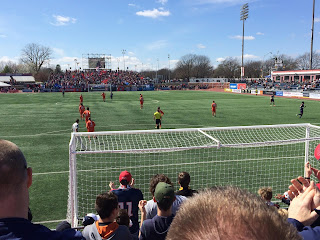 We had such great seats for my first Indy Eleven game, especially since they scored two goals on corner kicks to start the game. It was a beautiful day and a really fun atmosphere. Ashleyne also experienced her first corn dog, of which she was not a huge fan. 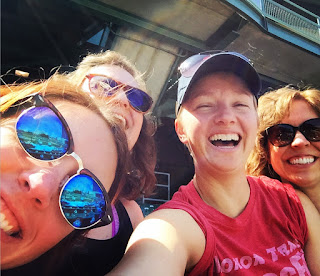 I have decided that very few things are lovelier than sitting in the sunshine at a baseball game in the middle of a workday. In good seats behind home plate. For free. I also had an extensive conversation about what people's stories were- why they were at the ballpark on a Wednesday afternoon.

#167 exercise every day for a month 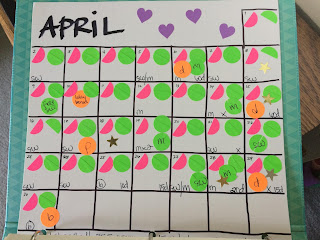 Here's a sample of what my sticker chart looks like for a month. The pink stickers represent my daily activity, which I am counting for exercising every day for a month. I'm starting to cash in on some of my rewards from my Holly Binder.

Hope everyone has a wonderful summer and goes on some great adventures of your own!
Posted by hjwillman at 4:32 PM