Only a short 9 months since my last update! Haha I think I'm really getting the hang of this consistent blogging thing. But I finished a good chunk of activities and I also worked hard at getting caught up on some of my reading. Due to the number of items I'm blogging about, I'm going to probably say very little about the books, but feel free to ask me about any of them that you want to know more about. 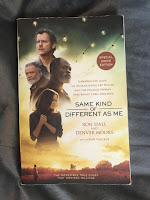 "Looking back now, I mourn the mutual wounds inflicted in verbal battles with the 'unsaved.' In fact, I have chosen to delete that particular term from my vocabulary as I have learned that even with my $500 European-designer bifocals, I cannot see into a person's heart to know his spiritual condition. All I can do is tell the jagged tale of my own spiritual journey and declare that my life has been the better for having followed Christ."

#289 do 10 activities that are new or intimidating (1 done)...pie eating contest
Since there wasn't any female representation in the pie eating contest at church, I of course decided I should participate. My chief competitors were the Harris brothers who are more than 15 years younger than me (everyone else was even younger than that) and are over 6 feet tall. I obviously had no chance. 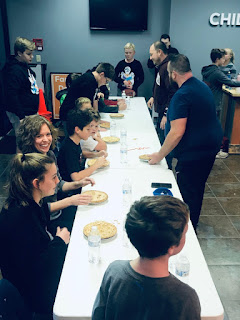 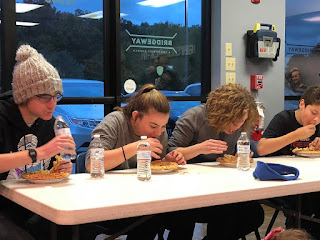 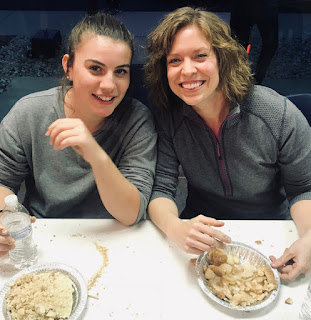 I convinced one of my high school girls, Abi, to do it with me. She was such a good sport since it was way outside of her comfort zone. There were dozens of people crowded around watching us and taking videos so it was kind of intense. 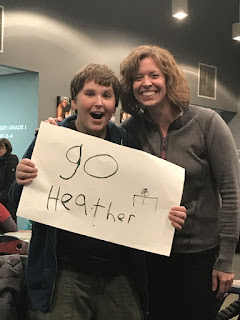 Haha but I love that Ben made a sign to cheer for me instead of his two brothers that were competing against me. What can I say, I'm such a fan favorite! Also, for future reference: I may not be a speed eater, but I could definitely perform well in an endurance challenge.

#24 read Tess of the d'Urbervilles by Thomas Hardy 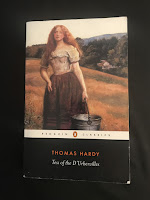 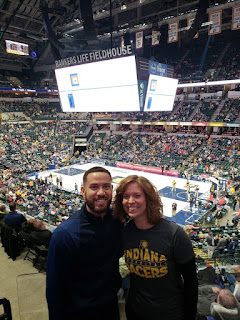 Chris did his fellowship at our office for 9 months so I tried to help him experience some Indiana things while he was here. He's a Wizards fan so we went to watch them play the Pacers. It was an exciting game where we blew a big lead but managed to hold on for the win. 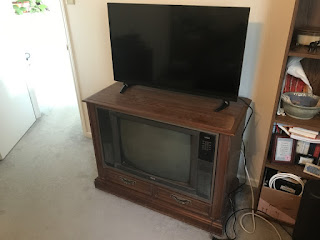 I finally broke down and did it! I got my console TV for free when I first moved into my apartment in 2004 and then brought it along to the house too. I was a little sad to get rid of it though since it was still working. No, I did not actually keep it to use as a TV stand for the new one even though it was very tempting. A big thanks to my friend Curtis who actually did the research for me and found a good deal for me on my new one! 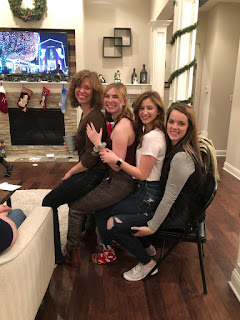 There is an actual video of this floating around somewhere but I will just let you use your imagination instead. I went to a Christmas party (once again I was about 15 years older than everyone but the parents...I'm beginning to see a pattern here that may be related to the fact that I am much closer to the end of this list than to the start of it) where we played a bunch of games. My "reward" for winning the Christmas logic puzzle game was that my partner and I had to compete against each other in a lip sync battle. I tried to hold my own, but she was definitely much more accustomed to doing dramatic performances. Anything to make people laugh though!

#291 play the piano every week for a year
So my goal was to play half an hour every week and make up any weeks that I missed. I did pretty well overall but had to apologize to my roomie that she would hear me play a lot the last week since I had something like 7-8 hours left. At least I had lots of Christmas songs I could play through at the end of the year.

#107 read The Alchemist by Paulo Coelho 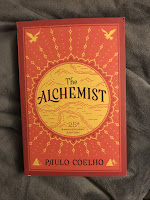 "We are afraid of losing what we have, whether it's our life or our possessions and property. But this fear evaporates when we understand that our life stories and the history of the world were written by the same hand." 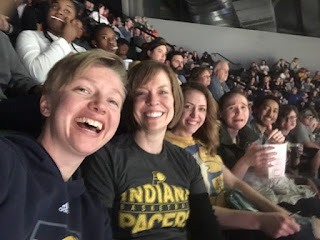 A fun Christmas gift for my friends and a very memorable first Pacers game for the Tindalls. At one point during the game a large man barrel rolled all the way from the top of the section down to the bottom of it. He apparently fell and once the first few rows didn't stop him he just got so much momentum going that he couldn't stop. He went by through our row just a few seats over so it was really freaky. It happened so fast you hardly had time to realize what was happening or to try and stop him. So crazy.

I've determined if that ever happens to me I'm going to just go all spread eagle- getting an arm caught and breaking it would be way less traumatic than falling that far. Luckily, after a couple of minutes he got up and walked away with his friends so hopefully there were just a bunch of bruises for him the next day. 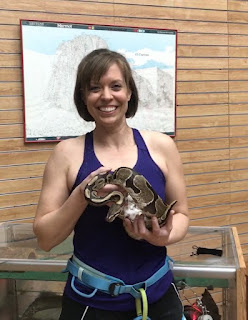 This is Penelope. She lives in a tank at Climb Time. I actually didn't even know she was real for a long time and it was about a year before I even learned her name. After yelling at me for not knowing her name, Jake (one of the awesome employees there) got her out for me to hold. On a random but fun side note, Jake recently learned his lesson about trying to fight my sister. I warned him that she had a vicious scissors hold if she got him down to the ground, but he had to learn the hard way. And then she accidentally backhanded him in the face later. Haha have I mentioned how much entertainment there is at the climbing gym?? 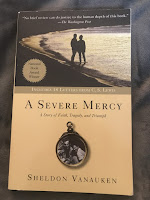 #282 get certified in something
I got CPR certified. Please don't make me use my knowledge.

#31 read Tarzan of the Apes by Edgar Rice Burroughs

#44 read Just As I Am by Billy Graham 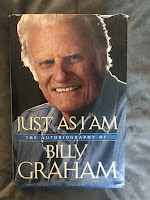 All I can say is it's ridiculously impressive how much he accomplished at such a young age and how he was able to touch millions of lives all around the world. And yet, when you do so much you realize there's so much more that needs to be done. A good reminder from Billy as he spoke about trying to visit places where they had provided assistance after disasters:


"We know we cannot do everything that needs to be done, but in a world that is never free of turmoil, Christ calls us to do what we can."

#247 don't speak for 24 hours
I guess it's kind of fitting that I don't have any picture for this one. Life had been crazy busy and I decided that I just wanted a mini vacation where I didn't have to be around people, could have a little silent retreat, and could get caught up on some of my reading. My awesome friend Sheri let me stay at her house while she was out of town and it was just what I needed to recharge. I had a whole day of quiet, journaling, and connecting with God.

#241 get a pedicure
This was well overdue since a) I've never had one before and b) climbing is hard on the feet. Our climbing buddy David told us his sister had just opened a salon in Carmel (Be.You.tiful Nails) so we went to support her new business. It was really nice in there and I had a great time hanging out with my sweet climbing girls. They were also kind enough to pick out a color for me since I could not handle the overwhelming number of options. My nails looked great for about 3 weeks and then the climbing shoes took a toll on them. 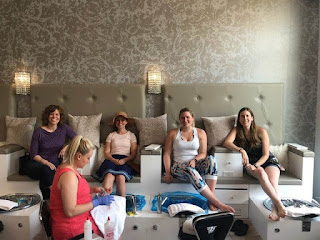 Me with Cameron, Carolyn, and Christina. Carolyn was such a sweetie to give me my pedicure as a late birthday present! 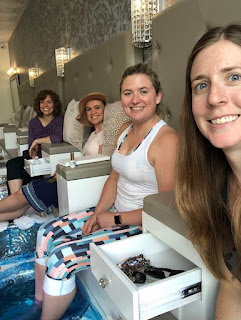 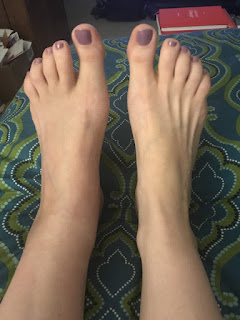 #289 do 10 activities that are new or intimidating (3 done)...lead climbing
Holly and I decided to learn how to lead climb with Aaron & Carolyn so that we can climb outside at some point. I only really said yes because I like hanging out with them and it would count toward an item on my list. I don't particularly like to learn new things or do things that I'm not good at (hence why I added #289 to the list). I get weirdly nervous and become a chatty student who makes a lot of jokes. Luckily Topher was super chill and made class a lot of fun. Unfortunately for him we suffered schedule issues, job stuff, and my badly sprained ankle. So our 4 or 5 sessions ended up stretching out for 4 months before we finally all officially graduated. I also tried to jack up my good ankle during one lesson. But at least in the end we learned a new skill, made a new friend, and I evened out the ankles so my bad ankle didn't seem as terrible when you compare it to my "good" ankle. 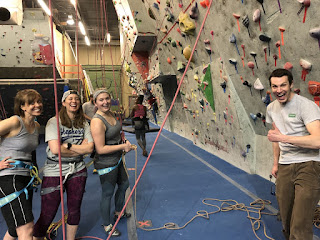 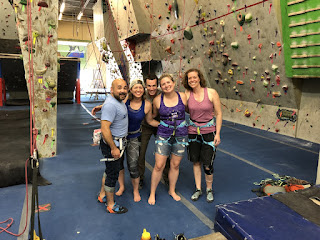 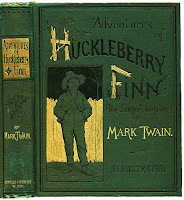 For those of you keeping score at home, the tally is now 94/120 books and 233/300 total items. So I have to double up on books some months still but I'm not too far off the pace. If I didn't mention it before (who can remember these things when it's been 9 months since the last blog??), I'm also taking suggestions for #298 which was added to the list- create a 40 things to do in my 40s list. This of course is assuming that I survive my 300 list. Thanks for reading and if you've stuck with it through such a long update, you definitely get a good star today!!
Posted by hjwillman at 9:05 PM