Getting caught up on books...

Since after 4 years I was little behind the pace on the number of books I've read, I'm making an effort to get caught up a little bit. My problem is that I keep reading books that aren't on my list. : ) 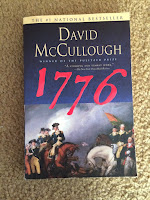 This was a really interesting read on the Revolutionary War. He provides you with such extensive information from all of the research he did, but he still makes it an enjoyable read that really focuses on the historical figures and their roles throughout the war. You get so much insight into the people, military strategy, and other details because of the vast number of letters that were written by people back then. The book (obviously) focuses on the year 1776, but then quickly summarizes the rest of the war in a few pages. The book ended unexpectedly because the last 70 or so pages are just his source notes and bibliography! My dad said he needed to find out how the war ended so he bought another book (which will probably get added to my list). It was one that McCullough said that he drew a lot of information from.

#113 read Julie and Julia: My Year of Cooking Dangerously by Julie Powell
I went into reading this book thinking that afterwards I would really want to cook my way through Joy of Cooking like she does in this story. Dead wrong. Those recipes sounded ridiculously time-consuming and complicated and it made me tired just reading about how late her meals were finished most nights. I didn't love this book, but it did make me want to go watch the movie again. And just read more about Julia Child. That's probably why I didn't like the book as well- Julie Powell is really not that endearing as a lead character (to which she would frankly say she doesn't care what I think) and it was kind of depressing to read online about what her life and second book were like (to which she would once again tell me she doesn't care what I think...and then probably cuss me out). But Julia Child is awesome. And Meryl Streep as Julia Child is also awesome. 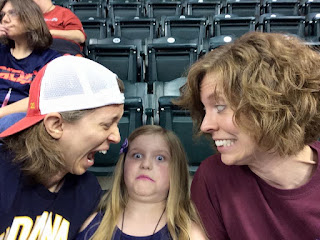 Aunts are creepy. But we are tons of fun! This was a belated Christmas present for Lily and it was the first Fever game that I've been to. I was bummed that Tamika Catchings wasn't playing since it's her last season before she retires, but you are now looking at... 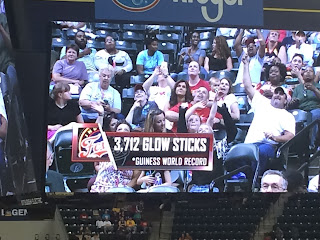 a world record holder!!! This ended up being a nice easy way to set a world record. The crowd set the record for the most people lighting glow sticks simultaneously. Side note: seriously, how was this record so low before? You can read about all of the excitement here or check out the official info on the Guinness site here. Sorry, I did not spend the $25 to purchase an official certificate to post on my blog. 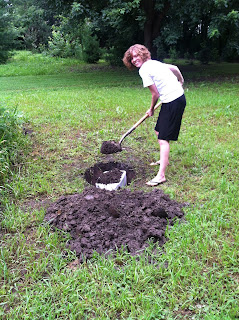 I thought about taking guesses from people about what I'm burying. But there are about 15 of you that read this blog and several of you already know the answer. It's a treasure chest. Obviously. Holly and I (emphasis on Holly) planned a scavenger hunt for our friend Liz's golden birthday (she turned 30 on the 30th of June). There were 30 different clues with various tasks or puzzles that she had to complete. Lots of fun little prizes and food throughout, four square and basketball competitions, a dance routine created, mystery guests, a giant homemade slip & slide, a pulled hamstring by my older brother as he sprinted across the yard for what was going to be a legendary attempt on said slip & slide, and lots of other fun things. The final clue was a treasure map that led Liz to a tub full of awesome stuff that was buried in my parents' backyard. It was pretty epic and we are very open to being hired out to plan one for you! 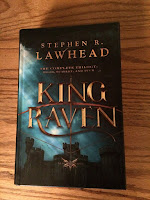 The King Raven trilogy is one that that my friend Josh had recommended and I really enjoyed it. If you're looking for the Robin Hood story to be told in exactly the same way that you've heard it before, you're going to be disappointed. The author explains that in his research, this is what he believes is more true to the actual events. The story takes place mainly in Wales and the characters and background also vary. King Richard & Prince John, Nottingham- these all came about from the story being tweaked by traveling minstrels to fit the characters and location to what the audience was familiar with. It was a pretty quick read and good action throughout.

#170 play paintball
Sorry, forgot to take a picture. I had played paintball once before, but it had been over a decade ago. We had a family camp with our church down at Camp Challenge. Their course was a lot of fun for the 10 or so of us that played. Plus it's a whole lot of fun to give other people (especially my high school kids!) welts and bruises. I escaped mainly unscathed, although I had a slight scare when I ducked around a barrier and found a wasp's nest right in front of my face. Needless to say I ducked right back out from there in a hurry! The bum knees make it hard to kneel or squat for any length of time, but I had a blast.

#229 buy stock
I was not planning on investing in a whole pile of stock, so I thought I'd just make it kind of random and fun. So I took my love of sports, and the Colts in particular, and found something that was kind of neat. Apparently there is a thing where you can actually buy stock in a handful of athletes...including Jack Mewhort, offensive lineman for the Colts! Maybe not the soundest investment, but I thought it was kind of cool. Check it out here on Fantex.